Description:  An eccentric yet compassionate extraterrestrial Time Lord zips through time and space to solve problems and battle injustice across the universe, traveling via the TARDIS (Time and Relative Dimensions in Space), which is his old and occasionally unreliable spaceship that resembles a blue police phone box (but changes its appearance depending on its surroundings) and is much, much larger inside than outside.

Across the Universe by Beth Revis

Amazon’s Description:  WHAT DOES IT TAKE TO SURVIVE ABOARD A SPACESHIP FUELED BY LIES? Amy is a cryogenically frozen passenger aboard the spaceship Godspeed. She has left her boyfriend, friends–and planet–behind to join her parents as a member of Project Ark Ship. Amy and her parents believe they will wake on a new planet, Centauri-Earth, three hundred years in the future. But fifty years before Godspeed’s scheduled landing, cryo chamber 42 is mysteriously unplugged, and Amy is violently woken from her frozen slumber. Someone tried to murder her. Now, Amy is caught inside an enclosed world where nothing makes sense. Godspeed’s 2,312 passengers have forfeited all control to Eldest, a tyrannical and frightening leader. And Elder, Eldest’s rebellious teenage heir, is both fascinated with Amy and eager to discover whether he has what it takes to lead. Amy desperately wants to trust Elder. But should she put her faith in a boy who has never seen life outside the ship’s cold metal walls? All Amy knows is that she and Elder must race to unlock Godspeed’s hidden secrets before whoever woke her tries to kill again.

Crossover Appeal: This book features many key elements of a classic Doctor Who episode: a tightly wound plot, thrilling tension, exploration of new alien cultures, and an underlining examination of what it means to be human. The razor sharp action and near claustrophobic setting add a heightened sense of suspense.

The Sparrow by Mary Doria Russell

Amazon’s Description: Emilio Sandoz is a remarkable man, a living saint and Jesuit priest who undergoes an experience so harrowing and profound that it makes him question the existence of God. This experience – the first contact between human beings and intelligent extraterrestrial life – begins with a small mistake and ends in a horrible catastrophe. Sandoz is a part of the crew sent to explore a new planet. What they find is a civilization so alien and incomprehensible that they feel compelled to wonder what it means to be human

Crossover Appeal: Many of Doctor Who’s episodes have a philosophical angle to them, often exploring how different cultures evolve and how small actions can have big consequences. The Sparrow is a long, philosophical exploration of humanity’s first interactions with an alien species, and the subsequent results of that. Atmospheric, contemplative, and suspenseful, this readalike touches on multiple appeals for a Doctor Who fan.

A Thousand Pieces of You by Claudia Gray

Amazon’s Description:  Marguerite Caine’s physicist parents are known for their groundbreaking achievements. Their most astonishing invention, called the Firebird, allows users to jump into multiple universes—and promises to revolutionize science forever. But then Marguerite’s father is murdered, and the killer—her parent’s handsome, enigmatic assistant Paul— escapes into another dimension before the law can touch him. Marguerite refuses to let the man who destroyed her family go free. So she races after Paul through different universes, always leaping into another version of herself. But she also meets alternate versions of the people she knows—including Paul, whose life entangles with hers in increasingly familiar ways. Before long she begins to question Paul’s guilt—as well as her own heart. And soon she discovers the truth behind her father’s death is far more sinister than she expected.

Crossover Appeal: While Doctor Who travels time and space, and Marguerite travels different dimensions, both stories feature in-depth explorations of cultures that are almost like ours, but not quite. Full of action-filled suspense and a solid science-fiction framework, this book has multiple appeal factors for fans of Doctor Who. 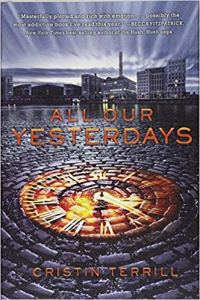 All Our Yesterdays by  Cristin Terrill

Amazon ‘s Description: “You have to kill him.”  Imprisoned in the heart of a secret military base, Em has nothing except the voice of the boy in the cell next door and the list of instructions she finds taped inside the drain. Only Em can complete the final instruction. She’s tried everything to prevent the creation of a time machine that will tear the world apart. She holds the proof: a list she has never seen before, written in her own hand. Each failed attempt in the past has led her to the same terrible present—imprisoned and tortured by a sadistic man called the doctor while war rages outside. Marina has loved her best friend James since the day he moved next door when they were children. A gorgeous, introverted science prodigy from one of America’s most famous families, James finally seems to be seeing Marina in a new way, too. But on one disastrous night, James’s life crumbles apart, and with it, Marina’s hopes for their future. Now someone is trying to kill him. Marina will protect James, no matter what. Even if it means opening her eyes to a truth so terrible that she may not survive it. At least not as the girl she once was.  “All Our Yesterdays” is a wrenching, brilliantly plotted story of fierce love, unthinkable sacrifice, and the infinite implications of our every choice.

Crossover Appeal:  This book heavily focuses on the ramifications of time travel, and is deeply immersed in the science behind it, as well. With a tautly written plot, and a deep exploration of characters, this book could easily pass as a multi-arc episode of Doctor Who.

The Best of All Possible Worlds by Karen Lord

Amazon ‘s Description:  A proud and reserved alien society finds its homeland destroyed in an unprovoked act of aggression, and the survivors have no choice but to reach out to the indigenous humanoids of their adopted world, to whom they are distantly related. They wish to preserve their cherished way of life but come to discover that in order to preserve their culture, they may have to change it forever. Now a man and a woman from these two clashing societies must work together to save this vanishing race—and end up uncovering ancient mysteries with far-reaching ramifications. As their mission hangs in the balance, this unlikely team—one cool and cerebral, the other fiery and impulsive—just may find in each other their own destinies . . . and a force that transcends all.

Crossover Appeal: Much like an episode of Doctor Who, this book introduces readers to two alien societies, and explores what happens when they meet. From the taunt action, to the deep exploration of new alien societies, to the philosophical musings on how best to preserve a culture in a changing world, this book hits upon many of the key themes of classic Doctor Who episodes.