The show’s main focus is on the relationship between single mother Lorelai Gilmore and her daughter Rory, who live in Stars Hollow, Connecticut, a small fictional town filled with colorful characters.”

Amazon’s Description:  In this collection of personal essays, the beloved star of Gilmore Girls and Parenthood reveals stories about life, love, and working as a woman in Hollywood—along with behind-the-scenes dispatches from the set of the new Gilmore Girls, where she plays the fast-talking Lorelai Gilmore once again.

Crossover Appeal: The behind-the-scenes tidbits from the set of Gilmore Girls (and its 2016 miniseries sequel) will whet the appetites of Gilmore Girls’ superfans and Graham’s writing style is just as dynamic as her acting. 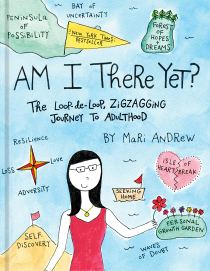 Am I There Yet?: The Loop-de-loop, Zigzagging Journey to Adulthood by Mari Andrew

Amazon’s Description: This on-point guide to growing up by Instagram sensation Mari Andrew captures the feelings and comical complexities of millennials and adulthood with essays and illustrations.

Crossover Appeal:Especially for fans who identify with Rory’s directionless post-grad life, as depicted in the “Year in the Life” miniseries, this hybrid graphic novel-essay collection packs the kind of emotional punch at the heart of the show.

WorldCat’s Description:  Presents the humorous journal of a year in the life of a fourteen-year-old British girl who tries to reduce the size of her nose, stop her mad cat from terrorizing the neighborhood animals, and win the love of handsome hunk Robbie.

Crossover Appeal: The drama of a private school will remind Gilmore Girls fans of Rory’s mishaps at Chilton Academy and the humor of this series will evoke Gilmore Girls’ trademark quips.

Amazon’s Description: The second revision in sixty years, this sublime collection ranges over the verse, stories, essays, and journalism of one of the twentieth century’s most quotable authors.

In this new twenty-first-century edition, devoted admirers will be sure to find their favorite verse and stories. But a variety of fresh material has also been added to create a fuller, more authentic picture of her life’s work. At the heart of her serious work lie her political writings dealing with race, labor, and international politics. “A Dorothy Parker Sampler” blends the sublime and the silly with the terrifying, a sort of tasting menu of verse, stories, essays, political journalism, a speech on writing, plus a catchy off-the-cuff rhyme she never thought to write down.

The introduction of two new sections is intended to provide the richest possible sense of Parker herself. “Self-Portrait” reprints an interview she did in 1956 with The Paris Review, part of a famed ongoing series of conversations (“Writers at Work”) conducted with the best of twentieth-century writers.

“Letters: 1905-1962,” which might be subtitled “Mrs. Parker Completely Uncensored,” presents correspondence written over the period of a half century, beginning in 1905 when twelve-year-old Dottie wrote her father during a summer vacation on Long Island, and concluding with a 1962 missive from Hollywood describing her fondness for Marilyn Monroe.

Features an introduction by Marion Meade and cover illustrations by renowned graphic artist Seth, creator of the comic series Palooka-ville

Summer of Salt by Katrina Leno

Amazon’s Description:  Georgina Fernweh waits impatiently for the tingle of magic in her fingers—magic that has touched every woman in her family. But with her eighteenth birthday looming at the end of this summer, Georgina fears her gift will never come. Over the course of her last summer on the island—a summer of storms, falling in love, and the mystery behind one rare three-hundred-year-old bird—Georgina will learn the truth about magic, in all its many forms.

Crossover Appeal: The only non-realistic fiction book on the list (stay with me!), the rural, small-town setting evokes Stars Hollow . . . as does its community of women who support one another unconditionally through all of life’s joys and heartbreaks. And the Fernweh mother-daughter relationships may just give the Gilmores a run for their money.