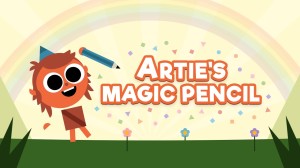 Description:  Children join Artie on an interactive and creative drawing adventure as they learn how shapes can combine in a variety of ways to form objects. Downloadable worksheets for continued learning off-screen are also included.  (Winner: ALSC’s Notable Children’s Digital Media, 2019) 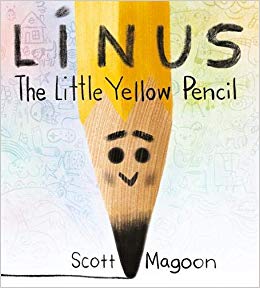 WorldCat’s Description:  Linus hopes to win the family art show but his eraser, Ernie, obliterates his work, his self-confidence, and his joy until a word from Smudge inspires Linus to try again.

Crossover Appeal: This sweet, uplifting picture book highlights the power of creativity and believing in oneself despite the trickle of doubts in the back of one’s mind.  The bright colors and cartoonish illustrations will remind readers of the visual style of Artie’s Magic Pencil as well. 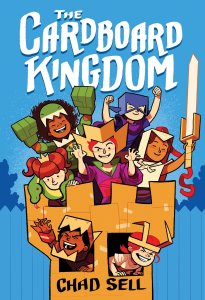 The Cardboard Kingdom by Chad Sell

WorldCat’s Description: Follows the adventures of a group of neighborhood children who create costumes from cardboard and use their imagination in adventures with knights, robots, and monsters.

Crossover Appeal: This graphic novel is illustrated with the same colorful simplicity of Artie’s Magic Pencil and similarly celebrates the fantastical world of the imagination and will remind readers of Artie’s magic-infused adventures.  Since this book is intended for slightly older readers, the heavier amounts of text may be most accessible as a family read-aloud.

Not a Box by Antoinette Portis

WorldCat’s Description:  A box is just a box . . . unless it’s not a box. From mountain to rocket ship, a small rabbit shows that a box will go as far as the imagination allows.

Crossover Appeal: This book works especially well as a read-aloud so that each page turn can be preceded with an invitation to guess what the rabbit will turn his box into next.  Here too as in Artie’s app, we have a reliance on simple shapes, lines, and colors to evoke more complex creations. 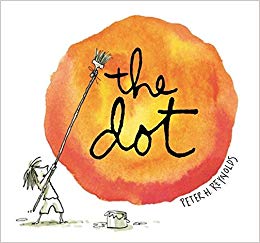 The Dot by Peter H. Reynolds

WorldCat’s Description:  Her teacher smiled. “Just make a mark and see where it takes you.”  Art class is over, but Vashti is sitting glued to her chair in front of a blank piece of paper. The words of her teacher are a gentle invitation to express herself. But Vashti can’t draw – she’s no artist. To prove her point, Vashti jabs at a blank sheet of paper to make an unremarkable and angry mark. “There!” she says. That one little dot marks the beginning of Vashti’s journey of surprise and self-discovery.

Crossover Appeal:  A picture book which spawned a yearly celebration of unbridled creativity, International Dot Day, this story of a reluctant artist will have readers cheering Vashti on each step of the way.

My Heart Is Like a Zoo by Michael Hall

WorldCat’s Description:  All the animals in this book are made of heart shapes. How many hearts can you count?   A book about feelings, colors, shapes, counting, and animals to share with the youngest child!

Crossover Appeal: This simple picture book, with bold and sharp graphics primarily composed of heart shapes in various colors and arrangements, mirrors the style of the app, and, since Artie encounters (and draws) many animals during his journey, readers should enjoy that aspect of the narrative as well.